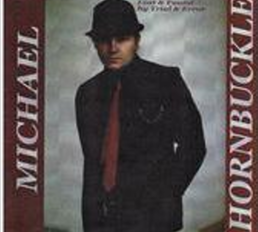 Back to Musical Mentions

The first time I heard Michael Hornbuckle play guitar was at the Buffalo Rose in Golden. Jason Cox, son of local legend guitar great Kenny Cox, had recently been killed in a car accident, and a benefit was held in his memory. Like most benefits, local musicians show their support and contribute their skills, along with what ever money they can give. Sixteen-year-old Michael played his father’s, (The late Bobby Hornbuckle.) red Gibson 335 guitar that night. His playing was rough, but if you we’re listening, you could see the shine of the diamond. It wasn’t the first time he performed in front of an audience, because he was the drummer in his father’s band. However, Michael told me that was the first time he ever played guitar in front of an audience. About a year and a half later I heard him play at the Rocky Mountain Guitar Show. The first thing that came to my mind was the story of Blues great Robert Johnson cutting a deal with the devil at the Cross Roads.Legend has it Johnson sold his soul in order to master playing blues guitar. Don’t worry, Michael didn’t sell his soul, he just practiced his @ss off to enhance the God-given talent he was blessed with.
Nowhere is this talent more evident than in his latest CD Lost & Found by Trial and Error.

"Lost & Found by Trial and Error," The title track starts with a "Foxy Lady," ala Hendrix guitar feedback and dives into a great funk groove that swings and is heavy on the two and four. Jeff Weidert’s bass drum pushes the tune along and bassist Dave Foret sits tight in the pocket. Keyboard player Joe Sellars lays down his fills in the right spot. This back drop fits Michael’s strong vocal and guitar leads perfectly, which by the way are sprinkled throughout the tune, and at times with the vocals. This usually can irritate me, but Michael does this effectively with never getting in the way of the vocals, but rather complimenting them. Harold Rapp’s sax also compliments Michael’s vocals nicely, and is a good finish to the tune. "Say Mama," This song has a funky New Orleans acoustic groove that just works so well with Michael’s vocal phrasing, which is just down right nasty on this tune and reminds me of Robert Plant’s early years with Led Zepplin. There’s as much feeling in his vocal as there is in his sleazy, slinky slide playing. Weidert’s snare hits are laid back, and like the song’s breaks and phrasing, gives the listener an anticipation to move on the beat

. "Baton Rouge," This song starts with Rapp blowing his sax like he just sacrificed a lung or

two. This tune has so much going on, it just kicks @ss all over the place. Foret’s bass line

has one of those infectious grooves that’ll have me humming it for a month. Weidert’s bass

shoulder move to the beat. The rhythm and horn section, which includes Jake Ball on trumpet, work like a fine tuned machine. The arrangement highlights Michael’s strong vocals and lyrics. Speaking of vocals, backup vocalists Tempa and Kara Hess are just plain sultry, "Do you wanna love me baby," I already do. I think Rapp did sacrifice a lung on this tune, nice work on the horn. This song’s arrangement is goose bump cool.

"It’s Alright" This song is a mellow piece with a catchy hook on the chorus. Michael’s vocals and harmonies with back up singer Kathryn Matlock shine. Sellars’ keyboard work is, again, effectively placed in all the right spots. Although there was plenty of opportunity for Michael to solo within the arrangement, he chose not to. Instead, he put a subtle horn solo by Andrew Kort in the bridge crescendo and added Matlock’s vocal harmony, which builds and ends nicely. Less is a lot more in this song’s arrangement and shows how Michael has matured as a song writer and

funk tune: his brother, Brian Hornbuckle. Brian is known for his superb signature slap and pop

funk playing. Michael, Brian and Weidert’s syncopated groove is deep in the pocket. At times

Weidert and Brian just become one with the beat. This song is Miles Davis-cool, and kudos

to Brian on being flashy without taking away from the tune. Michael’s phrasing on his lead gets down right dirty and nasty, and has great tone through out the song. The background vocals are a perfect fit.

"Heavens Away," This tune has Michael laying down a reggae groove to some really cool lyrics. Again the arrangement has another infectious bass line laid down by Foret. Weidert’s drumming is so deep in the pocket I think he still has some lint on him, nice hi-hat work. Matlock’s backing vocals are heavenly sounding. The pre chorus has a great crescendo leading to Michael punching in his vocal on the chorus, bringing in Matlock to mellow it out at the end, great dynamics. Sellars’ keyboards fill the background with a rich full sound and he plays some tasty fills in the bridge leading into the guitar lead. Michael’s guitar tone and phrasing on his leads comes across and just touches the soul. This song makes me close my eyes and smile.

"Leavin," The intro of guitar and keys intertwined with Michael’s vocal on top is the arrangement that moves throughout the tune and works well. Sellars’ keys really stand out on this song. When Michael’s lead comes in, it is played with a ton of feel. Throughout this CD, Michael’s guitar tone is signature. Great guitar players such as Clapton, Hendrix, Santana, and Stevie Ray, are known by their tone, and Michael Hornbuckle has accomplished this. People take notice, because this accomplishment puts him in a totally different league. What also has become signature are Michael’s vocals, which are strong, clear and unique. This song has a double dose of Michael’s musical talent. He plays drums on this song and he doesn’t miss a beat.

"Nothing to Lose," This song also has Michael on the drum kit, and one can hear just what a great drummer he is with a steady meter, deep pocket and high-hat and symbol phrasing of a seasoned percussionist. The tune begins with a catchy acoustic riff and Sellars demonstrates his musical sense and ability to place his keyboard playing in just the right spot again, amazing. Michael’s slide playing comes on bold and brash and is a great feel for the tune. I’m starting to sound like a vinyl record with a deep groove, but again his vocals just shine. Throughout this CD, his vocals are strong and clear and he makes the lyrics stand out. One would think the storytelling behind the lyrics belong to a much older man. Soul-telling stories with meaning, wrapped in monster musical emotion, is the only way I can describe it.

"After All," This tune has a cool, dirty, choppy rhythm guitar groove, accented by Weidert’s snare, and again Sellars paints a beautiful background. Sellars keyboard playing on the CD is phenomenal, not that he’s taking these huge solos, in fact the opposite is true. His note and chord placement just fills the song’s holes in the right place, it’s perfect. Michael’s lead guitar playing is full of tasty bends, and in the end just grabs you and doesn’t let go. His guitar playing becomes infectious. Also, kudos to the rhythm section work of Weidert and Foret. Their phrasing, dynamics and deep groove makes this a very special CD.

"Homage to Otis," This song is definately a musician’s tune. With lyrics like, "Well I, tried so hard to play my guitar more slow, Cause, cause all of the old timers tell me, ’Son this is how the song really goes." Musicians who have been in this game a while can definately relate to these words. This song features one of Michael’s mentors on guitar: local blues guitar legend Steve Crenshaw. This is just a fun shuffle song with great rhythm and lead guitar playing by two very capable blues men. The lead vocal is shared with Crenshaw and the vocal harmonies are gritty and hit home. Michael also plays the kit on this tune, and again doesn’t miss a beat. Nice cap to a great CD.

Michael picked the right musicians to sing and play on his CD, and I bow my head to all of them for doing a superb job and making magic happen. They contributed their talent to the kind of CD you can listen to while riding 500 miles on a lonely road. Emmy and Grammy award winner Mark Derryberry engineered, mixed and along with Michael produced the CD. Mark did a great job mixing and getting an excellent sound.  Lost & Found by Trial and Error

signature tone and vocals, but also as a musician who has written great songs with great

arrangements and catchy lyrics, "Long brown hair as thick as mud." Michael has proven he can

play much more than just the blues. Lost & Found by Trial and Error should put him on the map

and give him the recognition he has earned, and truly deserves. The CD can be purchased at any

of Michael’s live shows or at www.myspace.com/michaelhornbuckleblues. Check the website for his performance schedule. Catch Michael Hornbuckle’s Live Show.

This CD was years in the making. I had heard about it and was anxious when I found out that Michael was finally releasing it. So much so, that I had to run down to where he was playing at Ziggies to get a copy. I stuck around and caught some of his set. If you get the chance, check out his live show, and then you can say, "I was there when…" There aren’t many guitar players who give me goose bumps; he has that God-given ability. I strongly recommend the CD, no matter what kind of music you’re into. You will not be disappointed. Michael: thanks for the smiles and the tunes, now go kick the world’s @ss.
​