Still Rolling with the Punches
By Jerry Roys
Published: May 5, 2008

"I had nine years of dreaming. When I got out I found my way to my dream and never looked back."
Ron Lyle, talking about doing time in prison

Former heavy weight boxer Ron Lyle, 67, grew up in the Curtis Park Projects during the 1940s and 50s. Born in Ohio, Ron’s family moved to Denver when Ron was six years old. His father, William, was a Pentecostal preacher and was one of the first to bring the Apostolic Pentecostal faith to the area in 1943.
"I grew up in a church atmosphere," Ron says. "Even now if I miss two Sundays in a row I feel guilty. The soul starves for spiritual food. "Ron says he was blessed with good parents that cared. But even with church and good parents it was hard for him not to "be hanging with the dogs," and to escape the ways of the hood. Ron was the third in line of 19 children. He first strayed from home when he was 14 years old. Within a couple of years he would be serving time for burglary at the Buena Vista Correctional Facility, which was a reform school at the time. He spent 18 months at the facility.
"Reform school was tougher than the pen," Ron says. "It was more like a

gladiator school back then." Ron says it was family that helped get through

all the time he spent being locked up. "Your parents tell you certain things,

in the end it’s true," Ron says. "Had I listened to them I would have saved

myself a lot of misery and heart ache." Upon his release from reform school,

Ron again fell into his old ways and started hanging with his old friends.

He says he never got into drinking alcohol or doing drugs, but he did get into hanging out with the wrong people. What society labeled as a street gang Ron says was just friends in the neighborhood who looked after one another and were territorial. He says it was getting caught up in this scene that would lead to him spending a major part of his youth behind bars.  "Their fight was your fight," Ron says. "If you didn’t back them, you better not show your face."  Ron says one of his friends got into a fistfight with a rival over a girl. When the rival pulled a gun, Ron’s friends pulled their guns and killed him. Ron was there and got caught. He was charged as an accessory to second-degree murder.

In May of 1961, he was sent "behind the walls," and imprisoned in Old Max in Canon City. It would be in this place of desperation and violent offenders that Ron would take up his dream. Along with Ron’s dream was also a nightmare. While in prison he nearly met an early demise when another inmate stabbed him in the abdomen. One of the prison doctors had signed his death certificate. "My heart was drowning in my own blood," Ron says. "I died twice on the operating table, but God had other plans, and his plan is still working."  One prison doctor wouldn’t give up in trying to save Ron’s life.

After seven hours on the operating table and 36 blood transfusions, Ron was

sent to the prison infirmary. After that he was put into solitary confinement.

It was while doing time in "the hole," that Ron began to exercise. He set daily

goals and got to where he could do 1000 push-ups in an hour. His other goal

was to become the best in boxing. He began sparring with other inmates and

studying the game of boxing. He says he made due with what was available to

him. The equipment or the size of the boxing ring didn’t matter to him.

"I’d fight in a phone booth," Ron says. "It didn’t matter." What did matter was

his dream of becoming the heavy weight-boxing champion of the world. This would be his dream and his

goal while spending his youth behind bars. Upon his release, Ron was 28 years old, which is an age when most boxers are nearing the end of their careers. This is also the era of the supreme heavy weights; the competition was fierce, with legendary boxers like Mohammed Ali, Joe Frazier, George Forman, Ken Norton, Ernie Shavers, Jimmy Ellis and Larry Holmes. Even the secondary fighters like Oscar Bonivina and Jerry Quarry were tough adversaries.

Ron would start his pro career fighting these seasoned opponents. His amateur career would begin in Denver, winning the Golden Gloves championship, and he would tour Europe becoming the first American boxer to knock out a Russian fighter. From there he joined the Denver Rocks, the Denver based amateur boxing team. He would stay with the Rocks a short time before going pro.
When Ron turned pro in the spring of 1971, he was 30 years old. Ron’s start

was impressive, knocking out worthy fighters like Larry Middleton and Buster

Mathis. The only other fighter who had previously knocked out Mathis was Joe

Frazier. His winning streak would reach 19, then he would meet the boxer who

After the Quarry defeat, Ron would go on to win seven straight and then fight to a draw against Argentina’s Gregorio Peralta. On March 19, 1974, he fought another Argentinean in Denver, Oscar "Ringo" Bonavena. Bonavena predicted an early knockout of Ron, and in the first two rounds Bonavena pounded on him hard. By the third round, Ron found his rhythm and went on to win a very tough 12-round match.
Ron went on another win streak until he met Jimmy Young in Honolulu. Young won a decision over Ron, and would do it again later in Ron’s career in San Francisco. Young was smart and crafty, and after his loss to Young, the thought may have been Ron couldn’t beat this type of boxer. This mind set would give him the opportunity he had sought since his days in prison. The "Greatest" boxer of them all, World champion Muhammad Ali gave Ron a title bout at the Convention Center in Las Vegas on May 16, 1975.

Ali’s management and team may have thought Ron was going to be out boxed and an easy victory, but nothing could be farther from the truth. "It was a tough fight," Ron says. "I liked him, but my mind was set to go get him." And for 11 rounds, go get him is exactly what Ron did. The scorecards had Ron ahead on all 11 rounds when in the 12th round, Ali TKO’d him. "I was at my best," Ron says. "I don’t think they should have stopped it. I should have gotten a fighter’s chance to go out on my back." Ron says the Ali - Forman fight had all ready been signed, and that he wasn’t even given a full eight count. He feels politics played a big role in the outcome of that fight. It would be his only shot at the title.
However, it would not be the end of his boxing career. Ron would

fight the hard-hitting Earnie Shavers in Denver on September 13, 1975.

In the second round, Shavers landed a left hook that staggered Ron and

brought him to the canvass. "That was the first time I was ever knocked off

my feet," Ron says. "No one told me about this, no one told how to get up."
Ron says Shavers was the hardest hitter he ever faced, bar none. In fact,

he says he feels he was the hardest hitter in the history of the game. Ron knows he was the hardest puncher of the era he fought in. Ron came back from that hit and went on to beat Shavers in six rounds. He would face another heavy-handed puncher in George Forman at Caesars Palace in Las Vegas in January, 1976. "Forman was one of my best fights," Ron says. The fight started with a slow

first round, and the second round was ended a full two minutes early when the bell

the canvass twice. Ron tried to finish Forman off in the fifth round. With a flurry of

combination punches, he staggered Forman, but he didn’t go down. Instead, Forman

came back with his own volley of violent punches, which would put Ron down for

the count. Down, but never out, Ron would continue fighting until his retirement from

boxing in 1982. He would eventually move to Las Vegas and train fighters at the

Richard Steele Gym in North Las Vegas. There he would learn the game from another prospective. "The game has changed," Ron says." All the old timers are gone. Now trainers get their education on boxing from a book. If you didn’t fight yourself, how you going to teach?"
Ron now trains young fighters at the Red Shield Boxing Program, located in the Salvation Army Building at 2915 High St. in northeast Denver. He has returned to the neighborhood he grew up in. He feels blessed and his reward is seeing young individuals thrive.
​​

Back to Jerry's Journal 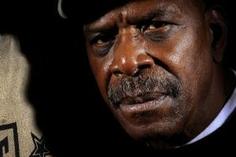